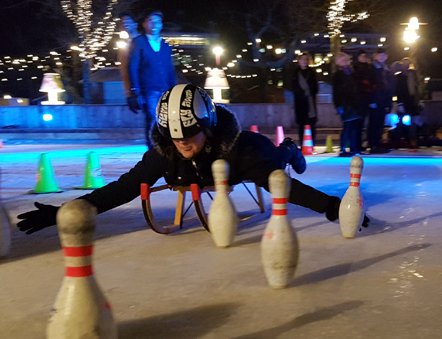 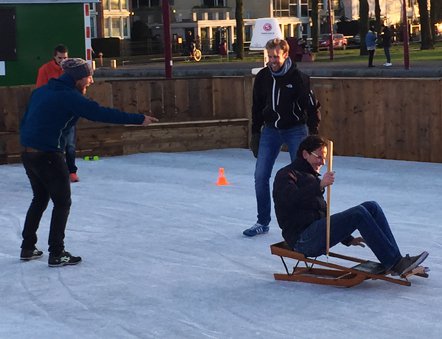 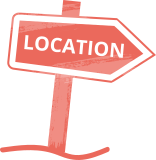 Brighten up your winter getaway with a fun team-building activity on the ice! Our Party on Ice event takes place at a unique location in the heart of Amsterdam, on the Museumplein. Soak up the atmosphere of this great city and get ready for a fun-fueled event on the ice! The Be Event Amsterdam ice games are ideal for a company outing, teamwork and communication are the key ingredients for success and of course, a lot of fun on the ice. The ice games consist of a rotation program of the activities which are listed below.

The aim of this game is to slide the curling stones as close to the center of the circle as possible. We have added a twist! Instead of curling stones, you will be curling a rubber innertube with one of your teammates aboard. Which team will get their human curling stone closest to the center (the house)? In this thrilling team-on-team competition, it is all about fun.

Try to complete the Rodel course as fast as possible. Using a traditional Dutch Rodel sled and ice picks to propel the sled forwards, it's a one-on-one race between the different teams. Keep your Rodel sled straight, pick up speed and watch out for those tricky corners! May the best team win!

The popular French game but then on the ice! Using a special hockey stick and several different colored pucks you take to the ice. The but (aiming point) is placed and the competition can begin. The object of the game is to get your pucks as close as possible to the but. Will you knock your opponent's pucks from the field and become a real Tireur, or will you be crowned the Pointeur of the day? Maybe you prefer a similar game, but in the Ice Shuffleboard variant? The tactics and techniques are the same. Only in this game, you will have to try to score as many points as possible by aiming the pucks through the slots of the Ice Shuffleboard.

With our custom-made curling stones, sweeper brooms and special starting blocks you and your team are ready to take on the competition. The aim is to slide the curling stones as close to the center (house) of the circle as possible. In this thrilling team-on-team competition, it comes down to steady hands, a fast sweeping broom, and tactical placement of your curling stones. The essential ingredients are FUN and teamwork!

*(Optional event instead of one of the above events)

For larger groups, we can organize a complete après ski party including, music and a fun apres ski quiz. Please enquire for the options.

Minimal number of participants: from 10 persons

*Always in combination with ice rental/access or a package including the ice rental. The ice rink Museumplein in Amsterdam charges € 10,50 p.p. this fee includes the Amsterdam entertainment tax.

Catering packages including ice rental costs are available per quote

Mid-November to mid-February. Outside of these months or in case of non availability, we also have a 2nd location; Ice rink Haarlem.

Pay Attention: On December 14 , 15 , 16, the Icerink in Amsterdam is not available for this event due to the Christmas Fair

REQUEST FOR A QUOTE FOR THIS EVENT